Welcome to our update page where you as our supporting Hero can keep track of our progress.

You get to hear it first right here! This page will be updated regularly with short stories, photos and videos of our expedition so you can join the adventure.
A big thanks to you for supporting us and stay tuned!

P.S. this page has been created in the wild!

By becoming a donator, you’ll instantly unlock access to all exclusive early acces posts and video’s.

Updated regularly ( we have limited acces internet in the wild 😉 )

We’re on the move! With months of planning, weeks of building, testing our equipment and vans we’re finally on our way!

In the morning (29-05-2021) we said our goodbye’s to our family, friends and donation Heroes at Hotel Mijdrecht. Pictures and lots of good luck & be safe wishes later we left the sunny hotel park and were warmly welcomed by a small crowd and the alderman Rein Kroon at the town square of Mijdrecht. Accompanied by applaus, laughs, cheers and some tears we hopped in our Bukhanka’s and took off on a 7 day testdrive south of approximately 3000km.

Escorted to the Dutch border by two Bukhanka’s from the NL club “Aanmodderaars” we set course for the Le Havre area in France. While driving our first miles, the realisation slowly settled in that the expedition was finally happening for real. A bizarre but awesome feeling!!

The 540km first stage trip also gave us time to look back at the past few weeks. Our departure would not have been possible without the amazing help of our team, friends, family and our supporting partners. A huge thanks to all of you! You know who you are and we’re eternally grateful!

A slow setting sun over the Atlantic welcomed us at our camp site near Fécamp for our first night. After a quick meal and over a beer we talked about the overwhelming experience of the very intens past weeks and the departure but also the quirks we noticed along the first kilometers. Tweaks to be made, small details to be finalised on the go but first tuck in for our first night.

Day 2 started quietly until Artyoms’ engine roared back into life to wake the northern hemisphere. The second stage took us just south of the city of Redon where we found an amazing wild campsite next to a calm stream at the edge of a meadow. A bit of off roading was required which was great & fun 🙂 Our camp setup skills were improving rapidly and putting our survival training to practice we created a small campfire to cook our hotdog dinner. The local wildlife was not impressed at all with us being there (huge rats) but did result in dinner and a show ;-).

With a sharp eye on the weather report we swiftly packed up camp and started our third stage towards Dune du Pilat close to Bordeaux. Unfortunately the wind predictions didn’t look too good for soaring but we kept a quick pace just in case the wind would change, giving Lex a chance to fly at this very impressive Paraglider hotspot. We decided to use a camping to stay the night. After camp setup we climbed the massive dune and took a nice evening walk wrapping up day 3 with another stunning sunset.

Next up, Spain! After we spend a slow morning waiting for the weather to change so Lex could fly (which it didn’t) we took off for the last stage through France. With the lower west Pyrenees slowly rising above the landscape, San Sebastian was a relative short 250km drive away. The border crossing into Spain was smooth and quick resulting in two very happy travellers. Within a few minutes we reached the beach of San Sebastian celebrating the crossing and went up mont Igeldo towards camping Igeldo to stay the night. During dinner we discussed our progress and drive timings, vehicles and gear and felt we were slowly landing on a rhythm that works for us. 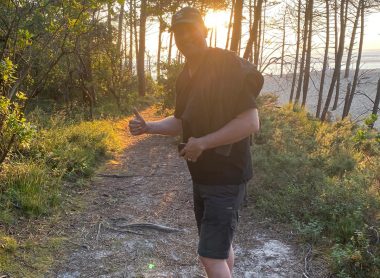 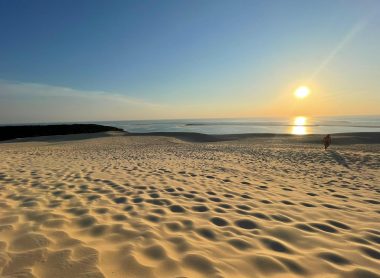 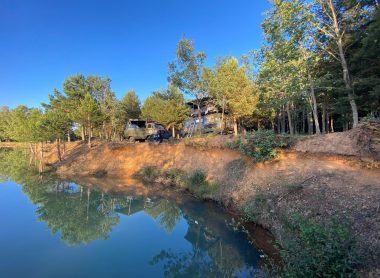 Our breakfast of day 5 was spend looking and balancing our planning & timing for the last stages of the testdrive. With the desire to lower the milage per day we decided not to stay in San Sebastian for the day but push on South to maintain the high tempo we set ourselves. Our heading was set at Cacères but promised ourselves to stop when we felt the need. Just south of the city of Salamanca we drove into the Sierra de Francia were a wild campsite next to a friendly little lake welcomed us for the night. With work to be done we worked on the website to create the page you’re on right now. Some more tweaking to be done later on we settled in for the night under yet another beautiful sunset over the lake.

The high pace and long stages did take a bit of toll on our physical well-being but with no time to waste and a long drive ahead we packed up and set course towards Sevilla. We had a 590km day ahead of us with a must take picture in Sevilla and a final destination at the west coast of Spain. Sevilla welcomed us with surprisingly quiet streets giving us some time to drive around, take the picture and head on to Huelva and the nice coast of the Doñana national park where we setup on a camping. With a mild but favourable wind we took to the beach for a short flight soaring off the coastal dunes.

The final stage. During breakfast we evaluated the past days, drive timings & distances, planning and how to best find what we want & need to film and photograph. With the lessons learned from the past days we altered the route for the day to test the final stage in order to optimise our travel to our set expedition goals. Today we would reach the end of our testdrive in Tarifa. Something we looked forward to for a long time. It felt a bit surreal.

The 300km stage was build up using small roads and plenty of villages. As before people promptly cheer and wave when we pass. Not completely without motivation of our DrazUAZ very loud classic Ford horn (ahooga) and Artyom monster throat 😉 These passages fill us with energy and joy and made the winding road feel shorter leading us straight onto the pier in Tarifa.

We made it! Briefly illegally parking at the pier for a quick photo we slowly started to realise we arrived at the starting point of our expedition, Tarifa. The starting point of our 24000km journey half way around the globe. We set up camp on a sea side camping and reflected on the learnings of the past week, planned the repairs and final tweaks for the journey ahead, recalculated stages of the route and raised a beer (or two).

The testdrive was concluded, the adventure could begin.

How better to start an expedition than waking up with a gentle sea breeze and a call from basecamp asking us why we hadn’t moved yet… We were both fully convinced we would spend the day in Tarifa so opted in for a bit slower morning than usual. With recalculating our stages for the upcoming days we left out the fact we needed one day more heading south. And as we did it at night we couldn’t check this with basecamp to confirm.

So Day 1 starts with a high speed version of camp dismantling, gear check, quick food grab of and off we go. Not at all how we imagined our day to be! We both felt stupid to have made such an easy to avoid error but also agreed we can’t start off with a delay at our first day. Some quick calls whilst leaving Tarifa were made with the team, last shots were recorded and a new slightly quicker route was made. Compass heading North – North East. Dawai!

The route was also the first try-out with our new set stages so we were looking forward to see how we would fair. Although the route being long for the remaining day we set off in good spirit and the views surely did help with that! Wow!!

We circled the Alcornocales national park on the west side (also due to a weather system in the region of Malaga) leading us to the beautiful little village of Bornos where we enjoyed a quick bite at Bar Titi next to the town square. Great Iberico! We turned east at Villamartin in line with our set destination Gaudix. After our second ferry crossing near Espera we met up with a great guy named David! He took a look at a new light brightening up Lex his dashboard. Engine failure.. Which came to life straight after a pretty deep pothole in the road. On the positive side Lex his steering wheel seems more straight now than before. After a few quick checks he seemed confident we could carry on so we did.  David, you rock!

A mix of fields, hills, small villages grazing the hill sides, farmland and nature parks slide across our low horizon vantage point in the Bukhanka and as we approach Granada, the Sierra Nevada now filled the horizon with grey silhouettes.

The weather system caught up with us and after some beautiful cloud formations we looked at earlier it turned to pretty heavy rain. Good to clean some of the dust from our vans but slowed driving a bit too.

We discovered again that hill climbing is not the forte of our Bukhanka’s. At some stretches we went  uphill in second gear at 30kmph. Fortunately the rain moved further north and with the fresh smell of rain in nature we searched for our camp site.

In Sierra de Baze national park near Gorafe you can find 240 Dolmen (ancient burial sites of approx 5000 years old). We located an awesome spot on the edge of the canyon and set in for the night.

After a quick dinner we enjoyed the appearing stars and signed off for the day.

Day 1 of the trip completed! Not quite as planned but still very very nice!

Driving 24.000+ kilometres across 14 countries to create a multi episode documentary and raise awareness & money for children around the world, driving two in 1965 designed but brand new UAZ Bukhanka vans from Amsterdam to Vladivostok.